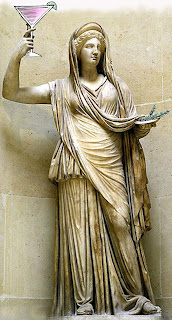 “As every man has his genius, every woman has her juno.”
—Bulfinch's Mythology

Several months back, this blog announced a scheme to rename our favorite drink, and we pledged that 2011 would be “The Year of the [New Name for a Cosmo Made with Gin].”

We’re ready to fill in those brackets.

Next time you’re out, shake up the bartender and order a Juno.

I can say that because Barbara came up with the name Juno. She thought it paid tribute to juniper (the berries of which give gin its distinctive flavor) while echoing the sassy sound of Cosmo’s final syllable.

She didn’t pick Juno for any connection to the Roman goddess by the same name, but that is a fitting connection. From the exhaustive reading I’ve done (in the last ten minutes), Juno is a complicated goddess, often called “Optima Maxima,” meaning best and greatest of the goddesses. She is the goddess of women, kind of a female guardian angel. Roman women called their souls or guardian spirits “juno” (corresponding to the “genius” of a man) in her honor. So is there a better name for what we think is the best and greatest of cocktail, one that is (with apologies to the men we love who enjoy it), a woman’s drink?

Barbara and I recently attended a mixology class sponsored by Cointreau. The lesson plan included Cosmos, and of course Barbara and I had to tell the class that we make ours with gin. The bartender/instructor wanted to know if we had a name for it, and we told him Juno. Barbara had made up some cards with the recipe for a Juno on the back.

The class introduced us to some very tasty drinks, recipes for which we’ll be sharing in the coming days. But the most exciting part of the evening was introducing Juno into the world. Interestingly, when the very lovely Cointreau representative, who was fascinated by the idea of making a Cosmo with gin, emailed the recipes a few days later, “The Original Cosmopolitan” recipe called for 2 oz. Vodka (or Gin for some). Emphasis mine.

Now we have to start spreading the word. Readers, go out and order a Juno. Express surprise when the bartender doesn’t know how to make it. “Really? You’ve never heard of it? It’s like a Cosmopolitan, but it’s made with gin. And it must be made with Cointreau, not triple sec.” Let us know what happens.

The Year of the Juno has begun. Long live the Juno.
Posted by Mary at 12:48 PM

Excellent choice of appellation. I think you and Marty should come to LBI for a pub crawl. We can spread the news together. I applaud you for your superior judgment in preferring gin over vodka. So much more complex and interesting. I love cointreau. We usually call for Grand Marnier for the cosmo, but I'll bet the "Big C" would make an even better one.

Challenge accepted, lovely friends of Michele Hush, I shall report back.

I love Cointreau in Margaritas, but haven't had it with gin—to the best of my sober recollection—so this sounds interesting.

I'm making my Junipero gin and tonics with St. Germain, fresh lime juice (on the rim of the glass, and the juice of that lime quarter squeezed into the glass and discarded, and a second lime quarter squeezed and added as garnish), bitters, and Fever Tree tonic in case you want to try that combination. It is delicious.

Addendum: Is there somewhere on your blog where you describe your gin Cosmo/Cointreau drink recipe as on the cards you mentioned? I've never had a Cosmo, and am curious about the proportions.

So glad to hear from a new reader and gin fan. The very first post of this blog (the one at the bottom of the list on the right, from 2007) is a basic recipe that I had taken from the Cointreau site. It's the way I still make them, but Barbara has changed the proportions to include way less cranberry juice -- a splash, really. You'll have to make it both ways and see which you prefer.

The g&t you describe sounds delicious and limey. I can assure you that Barbara and I will be trying it.

Barbara and I intend to get back to more frequent postings, so please be sure to check back.

Kevin, this is Mary, but when Barbara and Marty do the LBI pub crawl I want to be there too.

Uh, is there room for a Connecticut contingent in this endeavour (note "foreign" spelling)?

Brian, absolutely there is room. The more the merrier. We need to print up recipe cards to send to our readers. That'll be our next step...
Thanks for writing!