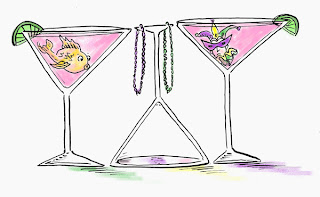 Barbara hosted a belated Mardi Gras party a few days after Ash Wednesday. Of course she wanted to have an on-theme cosmo; I was invited over on Thursday night before the party for a taste test of her new concoction.

I should have guessed what the secret ingredient was from the first pour, because the drink looked exactly like V-8 Splash. It tasted like V-8 Splash too, and as soon as I made that connection I could stop yelling out random guesses (“Crayfish broth!”) and just say, “Tomato juice! How clever!” Though the cosmo was good in a bloody-maryish kind of way, we decided it wasn’t really a success and dumped it.

Barbara wound up serving Cajun Cosmos made with fruit punch instead of cranberry juice, to give it a Hurricane-type flavor. For a garnish, she used the plastic babies I had leftover from a bag of them I bought for my king cake. Some sank to the bottom, some floated bottoms up, which was much more appropriate. Oddly, the baby I put in the king cake did not appear to be in anyone’s slice of cake. Since I definitely did put a baby in the cake before it was baked, there are only a few explanations for what happened: either someone unknowingly ate it (unlikely), or someone saw it in their slice but didn’t want to admit it (also unlikely), or it was thrown out when the plates were scraped of unfinished cake. That is of course the most likely explanation, but Barbara refused to do garbage forensics, so we’ll never know. Next year, I will make a cake big enough to hide a Barbie in to avoid a reoccurrance of this mystery.
Posted by Mary at 8:58 AM