I saw my brother-in-law this past weekend. “I love your blog,” he said, “but it really makes you two seem like lushes!” I laughed, because we really aren’t, which he knows; it’s just that whenever Barbara and I do have a cocktail, I write about it.

I laughed even harder when I saw the photo Barbara sent me to illustrate this week’s blog. 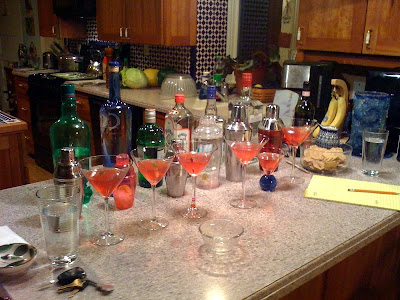 We are NOT a couple of lushes. What we are is a couple of dedicated taste testers. In addition to the tests we’ve already conducted – fresh lime juice versus Rose’s, Rose’s versus Key Lime, Cointreau versus Triple Sec, to name just a few, we will be testing crushed ice versus cubes, wide-flange shallow glasses over more narrow ones and the merits of a glass cocktail shaker over stainless steel. We're practically scientists, when you think about it.

So when Barbara wound up with six different gins in her cupboard, we went to work.

Beefeaters, Bombay, Tanqueray, Miller’s, Q and Highgate were each used to make one cosmo per brand. We then took sips from each glass, cleansing our palates in between with crackers and water. We only finished the ones we liked best, which for me was Bombay (which I don’t think I’ve ever had before and never thought I’d ever try, after a bad experience with its Sapphire variation) and for Barbara was Tanqueray (not a surprise, since we know we liked that). But we agreed the differences between Beefeaters, Bombay, Tanqueray and Highgate were so minor that any one of them would be more than acceptable.

Q had a very different taste that we liked, though it would not be our first choice (nor second, third nor fourth). But Miller’s has a definite taste that we definitely do not like. I know it’s not cheap (like Highgate is) and has some good reviews on line. But it’s way too floral for either of our tastes.

Before all the discerning gin drinkers get up in arms about the travesty of including Highgate on that list, let me say that Barbara and I are not discerning gin drinkers, apparently. And I think the difference that might be apparent in a martini or a gin and tonic are less obvious when you start adding the other three cosmo ingredients. And then it wouldn’t be a cosmo. Or a [new name here]; still debating how to rebrand our drink of choice. As I’ve said, I think we have a winner….

Correction: The original version of this article erroneously reported that Barbara's favorite was Tanqueray; in fact, it was Highgate. Which means Mary is a bad reporter and Barbara is a cheap date.
Posted by Mary at 7:02 AM

Personally, I prefer Tanqueray. The regular Bombay is a cloudy, muckish taste experience, in my book. You might try a French gin called Citadel. It's rather unique, and pleasant in its citrus qualities.

I'd love to do another taste test with six more gins. Citadel will be on the list. Thanks for commenting. mg

I certainly hope you didn't throw any out! ;0)